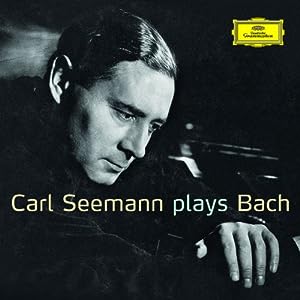 Pianist Carl Seemann (1910-1983) already has a following for his recordings of the music of solo music by Mozart (sonatas, etc.), also put forth by Deutsche Grammophon [477 5856, 6 CDs, r. 1949-1954], which may now be somewhat hard to find, and of course, there are other recordings featuring the art of this brilliant pianist. Now comes some Bach in: a) its first release on CD; b) and all his Bach recordings on DGG. When first heard on LP, one critic wrote "Seemann's playing here is round and sonorous ... the real connoisseur will enjoy this disc both for its playing and recording." That critic was "right on!" It's a splendid recording and represents my own first hearing of this man's Bach in any form. The mono recordings were first published in 1953 and the stereo in 1959. Here's the program:

While many of us may have at least one recording we covet of all or some of these works, this answers the question (for me, at least) as to why we collectors want to hear other recordings of artists. Seemann's work in these pieces opens one's ears to a special clarity and tonal properties that bring new life to the music itself. While it is well near impossible or even practical to have everyone's recordings of favourite music, we pick and choose carefuily (sometimes from hip, as it were) and are either totally delighted or put-off. This disc is a delight from begining to end with some of the best DGG piano sound I've heard recorded on a piano that is wonderfully even and voiced beautifully.

I know nothing of this pianist.

Will check his work, based on your recommendation.

There's nothing remarkable about it. All one has to do is hit the right keys at the right time and the instrument plays itself.
-- Johann Sebastian Bach
Top

I can heartily recommend his reading of Bach's Partitas on Orfeo...
Sent via Twitter by @chalkperson
Top

I have a great disc of Seemann playing the Bach Partitas. If you enjoyed the DG release you should absolutely give this disc a look:

Chalkperson wrote:I can heartily recommend his reading of Bach's Partitas on Orfeo...

Ah, Chalkie beat me to it I see

As far as I remember, Seemann's recording career with DGG was roughly contemporary with Aeschbacher's. Both recorded a lot of standard repertoire which was later done by names that acquied more prominence and replaced Aeschbacher's and
Seemann's in the catalogue.

I must admit that I don't own any Seemann recording but simoply remember seeing the name in the literature. So it's nice to see his work revived. just as the two disks so far which feature Aeschbacher on the KASP label have been attracting attention and praise.
Werner Isler
Top
Post Reply
8 posts • Page 1 of 1