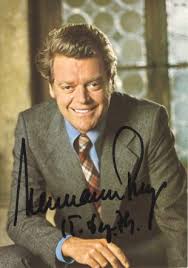 On Saturday, 14 July 2012, at 7:00 p.m. Eastern time, I offer a tribute to one of Germany's most beloved baritones, HERMANN PREY, born in Berlin on July 11th, 1929 and died of a heart attack in Bavaria on July 23rd, 1998. It was his mother who fostered Hermann's love of music, which he took to the end of his life. It was Hermann Prey who wanted to sing "everything," and he did! From music from the Renaissance period to art songs and especially German lieder—known and not so well known—operas, operettas, broadway tunes, oratorios and cantatas. Vocal afficionados have always compared the voices of Dietrich Fischer-Dieskau and Hermann Prey. It was Fischer-Dieskau who had the larger career on recordings, though Prey recorded substantially as well, and both have their camps. Comparisons will always be inevitable.

Prey also remembers the World War II years and remembers having to hide from the bombs and eating canned foods in his grandfather's basement. At 15, he was to appear for the war efforts of Germany, but by then the war was waning and Prey's father simply burned his son's draft notice.

After having studied at the Berlin High School of Music in 1948, he was a member of the Hamburg Opera's roster singing traditional and contemporary operas. He made his Metropolitan Opera debut in the music of Wagner, which didn't do much good for him insofar as the critics were concerned but eventually he also appeared at the Met in roles by Mozart and Rossini, which brought him accolades. Still, like Fischer-Dieskau, Prey's fame seems to be in the real of German lieder where he worked with some of the world's most accomplished pianists, including Günter Weissenborn, Alexis Weissenberg, Gerald Moore, Michael Engres, Karl Engel, and many others, both off- and on records and in the concert hall.

In 1982, he wrote his autobiography entitled First Night Fever. He recorded prolifically for EMI, Decca/London, Deutsche Grammophon, Philips, Capriccio, and many other labels.

The following will be featured on this broadcast:

Click on this link to take you directly the the broadcast:

Glad you're playing one of Prey's recordings with Karl Engel (on Decca/London, right?) as I think these might be his best - in Lieder anyway. He gets more out of the words without giving up anything of his beautiful sound.
John Francis
Top

I have many of those Decca/London Prey LP recordings. Much/most of that material has not been reissued by Decca on CD, but given that EMI has issued a 10-CD Icon set, it would not surprise me that Universal will come forth with a comparable Prey edition, which would also include his Philips recitals. The Decca Prey recordings with Gerald Moore, under contract to EMI, as accompanist also sees the great pianist working for EMI's major competitor! But now, due to the Universal/EMI takeover, only time will tell how all this will work out. All the recordings for my tribute to Prey are taken from EMI recordings.

John F wrote:Glad you're playing one of Prey's recordings with Karl Engel (on Decca/London, right?) as I think these might be his best - in Lieder anyway. He gets more out of the words without giving up anything of his beautiful sound.

Prey was a fine artist, an earthy presence with both feet firmly planted on the ground, while to my mind DF-D was more cerebral. Prey's rendition of the baritone aria from Die tote Stadt (Fritz's Tanzlied), led by Leinsdorf, shows deep intelligence and understanding of that incredibly complex score.

Aside from many others, a live performance of Mahler's Lieder eines Fahrenden Gesellen in Chicago w/Solti conducting stands out in my memory (I have it on cassette somewhere).

So glad you're doing this program, Lance!
Top

I', so glad you programmed the entire "Dichterliebe," Lance. What a masterpiece it is, done full justice in this performance.
Werner Isler
Top
Post Reply
6 posts • Page 1 of 1

Users browsing this forum: No registered users and 47 guests