I have no knowledge of Rorem's music although I certainly have heard of him. Had no idea he did an opera and so sorry I missed it when it was done at Julliard. This sentence from the article caught my eye-any recommendations on what to try first? Regards, Len


"But his insistence on tonality and his idiosyncratic style — a little French and a lot American — have outlasted the preferences of the 20th-century musical academy.
At 95, Ned Rorem Is Done Composing. But He’s Not Done Living."

“I know everything,” the composer Ned Rorem said on a recent afternoon, “but I remember nothing.”

Mr. Rorem — elder statesman of American art song, prolific prose writer, pioneer of gay liberation — was exaggerating. Now 95 years old (as of Tuesday), he is more forgetful than he used to be. But he actually remembers quite a lot.

Give him the right prompt, and he can dish at length on nearly every cultural luminary of the past century — he’s known almost all personally — and reminisce about Picasso’s Paris or the New York City of $25 rents. He’s a walking archive and anachronism.

But his world is shrinking. Most of his friends have long since died, as has his partner, James Holmes. (“I wish everyone would stop dying,” he said.) And the music world will observe his birthday modestly: concerts in Queens and Manhattan in early November, presented by Random Access Music, and a celebration on Dec. 20 at the Bruno Walter Auditorium at the New York Public Library for the Performing Arts, organized by the pianist Carolyn Enger.

There are no premieres on the horizon; Mr. Rorem is done with writing, both music and books. “I’ve kind of said everything I have to say, better than everybody else,” he said with the trademark swagger that runs through his famed diaries.

Mr. Rorem’s twilight is passing quietly at his apartment on the Upper West Side of Manhattan. With daily help from his niece Mary Marshall, he takes walks in Central Park, plays his music on the piano and does crossword puzzles. (With first and last names that lend themselves to crosswords, Mr. Rorem has appeared countless times as a clue in The New York Times’s puzzle. “It’s the only one I can get,” he joked.)


His home is tidy but densely packed, with hundreds of books in every room. The walls are covered in art, including portraits of him by prominent artists like Jean Cocteau and Dora Maar. He has a Degas, and a drawing by Klimt. His Steinway piano is covered in stacks of his own scores; below are boxes of archival materials being prepared for the Library of Congress.

There are visitors, mostly musicians relishing the opportunity to play a piece from the 1940s or ’50s and receive feedback from its composer. (Mr. Rorem had a long career as a teacher, with students including the Pulitzer Prize winner Jennifer Higdon.) The regulars know to arrive prepared: Ms. Enger, the pianist, had a package of Tate’s sugar cookies, and the clarinetist Thomas Piercy, a performer in the Random Access Music concerts, brought homemade chocolate chip cookies.

Mr. Rorem, who is warm in casual conversation, has no reservations about giving terse feedback. When Ms. Enger came by on a recent afternoon to play some of his piano works — many of them gifts for friends and family, with sentimental dedications — she stopped and asked, “Did I interpret it too much?”

And Mr. Piercy’s first run-in with the composer, in the late 1980s, was during a rehearsal with a pianist who had the instrument’s lid down; Mr. Rorem stormed in shouting, “No lid!”

Mr. Rorem has always had strong opinions about music; rarely have they been fashionable. But his insistence on tonality and his idiosyncratic style — a little French and a lot American — have outlasted the preferences of the 20th-century musical academy. Like vinyl records and sleek Danish furniture, Mr. Rorem has been both popular and passé, and just might now be ripe for resurgence.

You would be hard-pressed to find greatness in Mr. Rorem’s vast oeuvre. But he has never aimed to be a Beethoven. (Indeed, he doesn’t even like that master’s music.) Still, there are rediscoveries to be made: “Air Music” (1974) feels as fresh as when it won the Pulitzer. And the pyrotechnic Toccata from his First Piano Sonata belongs in the rotation of encores.


Mr. Rorem’s most recent major achievement was his 2006 opera adaptation of Thornton Wilder’s “Our Town,” the spare score of which is an ideal musical analogue to the source material. And he still reigns in the world of art songs, having written hundreds. The mezzo-soprano Susan Graham, who has recorded an album of his songs, described them as “straightforward and instantly relatable.”

“His music wraps itself around you,” she added. “He has the gift for letting poetry sing, and he knows the human voice — the warmth and the timbres, and how to bring them out in exactly the right place.”


Beyond music, Mr. Rorem is an icon of gay history. His published diaries, which total thousands of pages, are like sketches for his own “In Search of Lost Time”: panoramic and personal, with a cast of recognizable characters. There are jottings about anxiety, artistry and the loud air conditioner of Itzhak Perlman, his neighbor and bête noire — but the books are also cris de coeur for sexual freedom.

At a time when gay characters in pop culture were often tragic, Mr. Rorem depicted himself as triumphant: handsome, talented and entirely sure of himself. With a candor that prefigured Edmund White, he wrote openly and proudly about his gay friends who shaped American culture, like Leonard Bernstein, Edward Albee and Aaron Copland. In the diary collection “Lies,” he documented, in painfully raw and incremental detail, the decline of his partner from AIDS complications.

“I just wrote about all that because so what?” Mr. Rorem said. “I didn’t understand why anybody, including my parents, was particularly impressed. But I guess nobody else was doing it.”

His diaries are also a log of health anxieties and suicidal thoughts; he seemed, when he was younger, to think constantly about death. Not so much anymore: Mr. Rorem said that “most people are worse off than I am,” which is an understatement for a spry man in his mid-90s who has always looked far younger than his years and thinks that it would be “kind of cute” to reach 100.

“I’m not planning to die, ever, because I can’t quite figure out what it means to die,” he said. “What’s the point in living if you’re going to die?”

BTW the article has these clips:

I didn't know he was still alive. Apparently so, and in pretty full possession of his senses. He's best known for his songs and I think they're the best of him; his opera "Miss Julie," based on Strindberg's play and commissioned by New York City Opera 50 years ago, has been recorded, and it didn't make much of an impression on me.
John Francis
Top

John F wrote: ↑
Wed Oct 24, 2018 7:41 am
I didn't know he was still alive. Apparently so, and in pretty full possession of his senses. He's best known for his songs and I think they're the best of him; his opera "Miss Julie," based on Strindberg's play and commissioned by New York City Opera 50 years ago, has been recorded, and it didn't make much of an impression on me.

Thanks now I see there's more opera other than what I thought was just 1 opera. Regards, Len

A Childhood Miracle, 1951, opera in one act.
The Robbers, (1956), a one-act opera.
Miss Julie (1965)
Hearing (1966–76), opera in five scenes
Bertha (1968), opera in one act.
The Three Sisters Who Are Not Sisters (1968), three-act opera.
Fables (1971), five very short operas to poems by Jean de la Fontaine. The five 'micro-operas' are:
The Animals Sick of the Plague
The Bird Wounded by an Arrow
The Fox and the Grapes
The Lion in Love
The Sun and the Frogs.
Our Town (2005), first performed by the Indiana University Opera, Bloomington, in 2006. Subsequent performances have been given by the Show-Me Opera at the University of Missouri, Lake George Opera, Aspen Opera, Central City Opera, University of North Carolina School of the Arts, Festival Opera of Walnut Creek, The Catholic University of America, Juilliard Opera, Skylark Opera, Civic Opera of Kansas City, Raylynmor Opera Company, Tufts University, University of South Carolina University of North Texas, Shepherd School of Music, Baldwin–Wallace Conservatory of Music, University of Missouri, and the University of California, Irvine, among others.

[Miss Julie and Our Town are his only full length operas.]
Top

My goodness! I had no idea.
John Francis
Top

In his first memoir which I read in college, he speaks extensively about his struggle with alcoholism. It's something of a miracle that he has lived to 95.
There's nothing remarkable about it. All one has to do is hit the right keys at the right time and the instrument plays itself.
-- Johann Sebastian Bach
Top

Rorem also wrote three symphonies which are quite listenable: 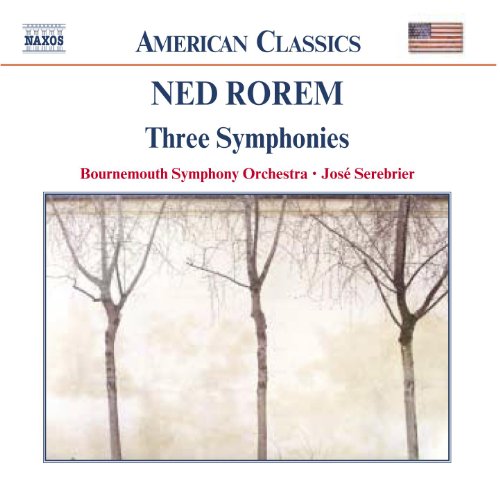 Rorem was best-known for his songs, which are very melodic and moving. Do seek out the Susan Graham disc: it's quite wonderful: 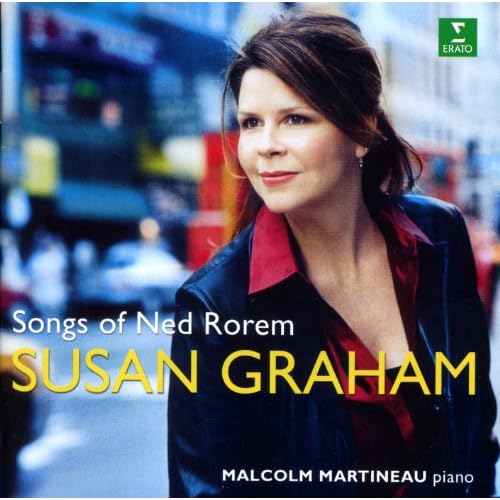 Rorem also composed (IIRC) three piano sonatas which I have not heard.

My wife used to study with Iris Hiskey, who was Philip Glass's lead soprano at one time (she premiered "Einstein" at the MET and Satyagraha in Brooklyn). Iris was well-known in contemporary music circles, and her debut recital at Merkin Hall sold out. For the recital, she chose 3 or 4 of Rorem's songs: he sent her a bill for royalties. That said, Philip Glass wrote a song cycle for her that was quite moving based on American Indian texts: needless to say, Glass never sent her a bill for the World Premiere.
Top

His brief, but wonderful, Piano Sonata No.2 played by Julius Katchen in a 1952 recording:

My recording of all 3 piano sonatas is a Centaur Records cd by pianist Thomas Lanners, very nice.

His Piano Concerto No. 2 and Cello Concerto are on a Naxos cd I have and can also recommend.

An excerpt from his Cello Concerto , whole work not at YT:

Here is final mov. of Piano Concerto No.2 , unfortunately whole work not at YT :

Much other of his music is at YT.
Top

Thanks to all for these recommendations-I have to find the time to try some of these out. Regards, Len
Top
Post Reply
9 posts • Page 1 of 1

Users browsing this forum: No registered users and 74 guests