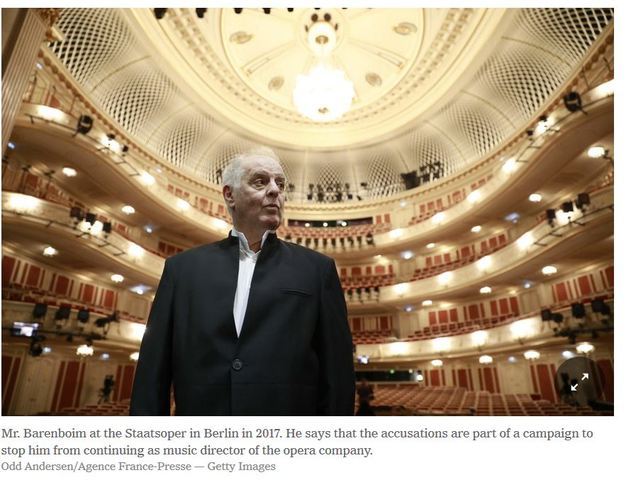 Daniel Barenboim, one of the world’s most celebrated conductors, is known for doing what he wants.

He founded an orchestra (the West-Eastern Divan, a youth ensemble of musicians from around the Middle East), a conservatory (the Barenboim-Said Akademie) and a concert hall (the Pierre Boulez Saal). In 2001, he broke a longstanding informal ban in Israel and conducted a piece by Richard Wagner, an anti-Semite beloved of the Nazis. He makes the kind of political statements most musicians avoid.

Mr. Barenboim, 76, has long been considered untouchable in Berlin, where he is music director of the Staatsoper — the city’s premier opera house — and principal conductor for life of its orchestra, the Staatskapelle. He is close to city politicians and has used his influence to ensure the opera company receives a healthy annual subsidy of 50.4 million euros ($57.4 million) from Berlin’s government.

But cracks have begun to emerge in the conductor’s image as Mr. Barenboim has been accused of bullying and humiliating members of the Staatskapelle. The accusations have been reported widely in German media, and there have been calls for politicians to intervene. A spokesman for Klaus Lederer, Berlin’s highest-ranking official for culture, whose department provides most of the Staatsoper’s funding, said Mr. Lederer has asked the opera company to appoint a third party to look into the matter.

“A piece of art might not always be democratic, but a public institution can’t be allowed to transform into a royal court,” said a recent article in the newspaper Der Tagesspiegel.

The New York Times has communicated with seven former or current members of the Staatskapelle. All highlighted examples of Mr. Barenboim’s behavior that they said was bullying and went beyond what was normal for a conductor.

Mr. Barenboim dismissed the accusations. “I was born in Argentina, so there’s a bit of Latin blood in my body, and I get upset now and then,” he told RBB, a German broadcaster.

In an email exchange with The Times, he denied bullying anyone. “Bullying and humiliating someone,” he wrote, “implies the intention of wanting to cause someone hurt, of taking pleasure in it, even. This is not in my character.”

Highhanded behavior was common in conductors of the last century, with maestros like Arturo Toscanini and Georg Solti known as harsh taskmasters. (One of Mr. Solti’s nicknames was “The Screaming Skull,” because of his bald head and temper.) But the debate around Mr. Barenboim raises the issue of whether such behavior is still possible.

“The issue is not personal, but a question of how orchestras are run in the 21st century,” Martin Reinhardt, a trombonist in the Copenhagen Philharmonic who played in the Staatskapelle and has openly criticized Mr. Barenboim’s behavior, said in a statement.


Willi Hilgers, a former timpanist with the Staatskapelle, said in a series of Facebook messages that Mr. Barenboim repeatedly humiliated him in front of colleagues by singling out his playing. As a result, he said, he had suffered “high blood pressure, depression, the feeling that you can no longer play your instrument, sleepless nights, my family had to suffer as well, no performance without beta blockers and antidepressants.”

Mr. Barenboim said that the accusations were part of a campaign to stop him from continuing as music director of the Staatsoper. “The fact these allegations have surfaced now, just as I am in negotiations about renewing my contract beyond 2022,” he wrote in the email exchange, “makes me wonder: If people were indeed hurt, as they claim to have been, why speak about it now, at this precise moment?”

“I know that in certain tense moments I have used a harsh tone that I regretted,” he added, but that was all. “I am not a shy lamb — but I am not a bully, either.”

In a statement, the Staatskapelle’s orchestral board said it had achieved “great artistic successes through mutual trust and close cooperation” with Mr. Barenboim. “This confidence remains untouched,” the statement added.

The accusations against Mr. Barenboim first appeared on Feb. 6 in VAN, an online classical music magazine, which interviewed over a dozen current and former employees of the Staatsoper, quoting them anonymously. The article described a leader “who can be inspiring and generous, but also authoritarian, mercurial and frightening.”


“Afterward, his attacks piled up against me,” Mr. Hilgers said.

Mr. Barenboim said in an email, “The timpanist you mention had a beautiful sound and made beautiful colors,” but he had “rhythmic weaknesses, which is very problematic.” Mr. Barenboim added that the pair had “some disagreements,” but that is normal when musicians are trying to get the best results.

Leo Siberski, 49, is now the music director of the Plauen-Zwickau Theater in Germany, and played trumpet in the Staatskapelle under Mr. Barenboim from 1992 to 2003. He said he witnessed outbursts from Mr. Barenboim directed at musicians, and started experiencing them himself after asking for a sabbatical in 1996.

Mr. Barenboim said he didn’t remember any request for a sabbatical. He added it was “fair practice to ask musicians in a world-class orchestra to play their lines alone.”

Mr. Siberski said he eventually quit as the orchestra’s principal trumpet to “get out of the firing line.” Now a conductor himself, he said he has adopted a different approach with the musicians he works with.

“If a responsible artistic director wants to lead his ensemble to new levels of quality, this will always cause some pain,” he said. “But there is a huge abyss between pain like sore muscles, and deep mental wounds caused from attacking your very dignity.”

Mr. Barenboim acknowledged that the world is changing. “That is generally a good thing,” he said. But, he added, “an orchestra cannot function if every tempo, every dynamic is put up for a democratic vote. Somebody has to lead, take decisions and be ultimately responsible.”

Wow! So what else is new?

I had an interesting conversation with a member of staff at Carnegie Hall when I was rehearsing my singers for a concert there. He excoriated Barenboim in no uncertain terms for his over-the-top demands about seating arrangements during a dress rehearsal, etc. Quite upset, he was.

Conductors must be demanding in service to the music, of course, but how far do you go? Barenboim's Bruckner (available on DVD) with Berlin is outstanding, perhaps the best I've heard, yet at what price?

Bullying is inexcusable. It's easy to cross the line when in a position of power, sometimes too easy.
Top

If a conductor is determined to run you off/keep you humiliated, you may as well bust him in the chops and be done with it

Lance wrote: ↑
Sat Mar 02, 2019 2:04 am
Sometimes, being a perfectionist draws this kind of temperament out of highly-gifted artists. Few conductors would ever get away with this kind of thing in today's world. One immediately thinks of Toscanini, among others, who scared the wits out of their orchestral member. I am rather surprised about Barenboim doing this, however. I don't recall this behavior from such beloved conductors as Stokowski, to select one noted conductor.

Bruno Walter and Sir Colin Davis were considered gentlemen and treated their orchestras well, as did Lorin Maazel, just to name a few off the top of my head. It all depends on the character of the individuals involved. I suspect that this will all blow over about Barenboim, although it didn't for Dutoit in Montreal, did it? We'll see.
Top

Barenboim's actions seem pretty lukewarm when compared to some of the past tyrants -
Toscanini, Reiner, Szell were all domineering tyrants - perhaps worst of all was Rodzinski, who had a volcanic temper and would execute summary firings....Toscanini, for all his histrionics was not known for summary firings, Reiner certainly was, but first he mentally beat the crap out of the targeted victim, same with Szell...Stokowski was known for mass firings as well...
Walter, Monteux were on the opposite end - very courteous and respectful of the musicians, but very demanding over musical matters...
Maazel does not have a good reputation amongst orchestra musicians, by and large - he was well-known for coming into a post, firing, or displacing long-time, well-regarded principals, section musicians, bringing in his own favorites, then leaving for another post...this has brought about new union contract provisions, limiting the number of dismissals a conductor may make in his first seasons in the post...
Top

Since the rise of the conductor and the growing size of the symphony orchestra this problem has arisen. We have read about conductors like Robert Schumann who simply couldn't control the orchestra and who was a shocking leader, right through to Hans von Bulow - who was immensely important in European musical life.

By the mid-end 19th century the role of the conductor had become very significant. Since the recording era we've developed a cult of the conductor; they are fetishized, lionized and almost accorded the status of the composers whose music they conduct. A (sometimes troublesome but also self-effacing) conductor like Carlos Kleiber regarded himself as a 'stick waver' and he said as much to Charles Barber ("Corresponding with Carlos"). In our celebrity-obsessed culture we have probably unwittingly contributed to the continuation of podium bullying which remains a stubborn legacy of fame. This cartoon, which I've posted before, neatly demonstrates what we've been talking about: but it's about legend and significance rather than bullying and temperament.

Belle wrote: ↑
Sun Mar 03, 2019 12:10 pm
In our celebrity-obsessed culture we have probably unwittingly contributed to the continuation of podium bullying which remains a stubborn legacy of fame.

In the USA , bullying is also a problem with our President.
Top
Post Reply
8 posts • Page 1 of 1