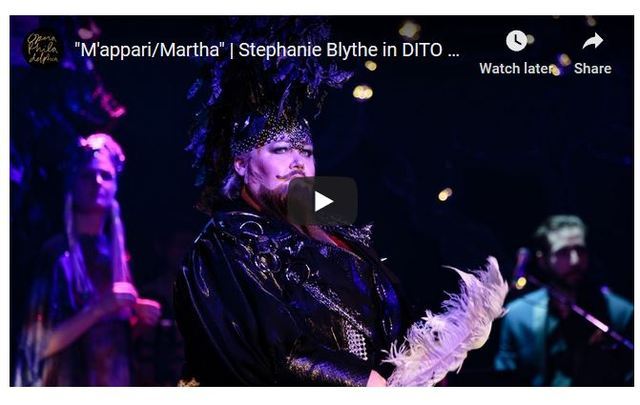 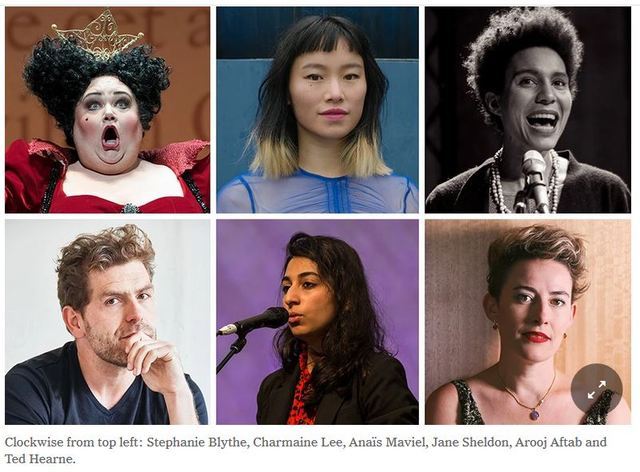 Stephanie Blythe Will Be There But Not Me. Regards, Len

What Does a Singer Do With Full Freedom?

The Resonant Bodies Festival — Tuesday through Thursday next week at Roulette, in Brooklyn — is an annual highlight because it gives some of the world’s most adventurous vocal artists full freedom to program their sets: three per night, 30 minutes per set.

In conversations with six of this year’s nine vocalists, they revealed their approaches to this wide-open opportunity. These are edited excerpts.

I’ve always been a bit suspicious of the vocal recital, which is practically criminal for a classically trained singer to say. But Resonant Bodies invites artists to blow it up a little. Lucy [Dhegrae, the festival’s founder and director] knew I’d begun to compose music with proper seriousness, rather than just fiddling around. She said the festival would be a good place to create a work longer than anything I’d done up to this point.


I already had in mind, and had received permission to set, a poem by Alice Oswald. It’s called “Dunt: a poem for a dried up river,” an astounding poem. It’s very musical in its manipulation of pace, the way repetition is used. The central image in it is of a Roman-era water nymph, a small female form carved in a time of drought. The poem contemplates the effort of this nymph, her physical labor. My piece is built on all the sonic consequences of physical labor, how it bears on how you breathe, how breathing in a very labored way can produce phonation.
Charmaine Lee

My process is predominantly improvised, but I also love composition and notated music, so I am doing a solo improvised set as a kind of intro to my process, and then I’ll be collaborating with a brilliant pianist and composer, Conrad Tao.

I use a variety of microphones with different low and high fidelities; I’m very interested in pushing our understanding of the voice and pushing the difference of electronic and human sounds. And when Conrad joins me, it’ll be more of a structured thing, but there’s a lot left in that. The piece that we’ve written is about the underbelly, everything that’s submerged. It’s hyper-focused on the details of granularity, focused on the details that surround what’s on the surface.

We don’t use a score; we might use text. The degree of notation is very, very open. We just know there will be touch points that we want to move through. The way our collaboration works, it’s just an ongoing reflection of where we are at that moment.

Resonant Bodies is perfect timing, because I have this big new work, which is the first thing I’ve done like this: just me singing, an evening-length song cycle. It’ll be a new production at the Walker Art Center in Minneapolis in November, and this is the perfect opportunity to try out some of those tunes.

I’m not sure what it is theatrically; I haven’t finished the piece yet. So I can really play with the dramaturgy of it and the order, without committing to how the theatrical piece will go. I’m still trying to figure out the balance of using my own unadorned voice and using vocal processing.

It’s from what will be a 70-minute show. It’s all the poetry of Dorothea Lasky, who’s incredible. I really fell in love with this poetry; it’s about abandoning the intellect, or questioning the intellect, and discovering the true inner core of your being — feelings are everything, and embracing inner wildness.
Anaïs Maviel

The solo work I do is like a laboratory for me. I play this West African harp, the n’goni, and it’s helped me reconnect with language and voice in a way I wasn’t able to do through other types of vocal music. I always felt that language was very disembodied for me, but when I got into the harp playing, I felt connected with Orpheus, the poet who tells the story of past and present and is kind of commenting on society’s goings-on. In West Africa it corresponds to the griot, who passes on oral history through poetry and sound.


The line is very blurry between composing and arranging. Ninety percent of the songs are songs that I wrote, but I don’t necessarily take credit for these things as much as maybe classical Western music would. There’s one Haitian traditional song that was an entry point; my mother is from Haiti. I was born in France and learned to sing in French, but I hadn’t opened up my voice fully until I looked into Haitian Creole.

I was excited to have an opportunity to bring my drag persona to New York. Blythely Oratonio is a dramatic tenor who dreams of being a rock star. It’s a cabaret-opera-rock ’n’ roll-disco mash-up, and basically gives me an opportunity to sing all the music I have dreamed of singing my whole life, from the time I was a preteen. It gave me a way to sing things I’ve always wanted to sing, which are tenor arias. It’s given me an opportunity to sing Puccini and Rick Springfield, Barry Manilow.

It was a way to explore a side of myself that clearly always wanted to come out. He’s the outrageous side of me. Blythely can say anything and can take risks that Stephanie can’t. It’s just an opportunity to spread joy, that’s what it’s all about. It gives me a whole new way of connecting with the audience, which for me is the No. 1 thing about being a performer, especially now.
Arooj Aftab

I have recently been delving into this project with the pianist Vijay Iyer and the guitarist Shahzad Ismaily. Playing together, the three of us, we found ourselves in this swirl of sound and performance; I didn’t feel what I was doing was defined as a vocal or Vijay was defined by his piano part. It became very fluid and mellifluous. Sometimes the energy between musicians just clicks.

We’ll meet beforehand and talk about our moods, or what happened that day. But we like to say very little and leave it to what happens onstage. We’re very much improvising, we’re very much experimenting. I’ll start a motif and Shahzad will put his spin on it, or Vijay will start. And we’ll start adding and layering over it. And when everybody’s ready, we move on.

I have a small repertoire of old pre-partition poetry that I love. If a couple of verses fit in how the music is making me feel, I will sing those there. I’m definitely always singing words.

It looks like the participants see the point of all this. I don't.
Top
Post Reply
3 posts • Page 1 of 1

Users browsing this forum: No registered users and 31 guests