Why are Haydn’s operas so lousy?

Why are Haydn’s operas so lousy?

A friend sent me this article from the Spectator-if this opera came to NYC would I go-would you? Regards, Len 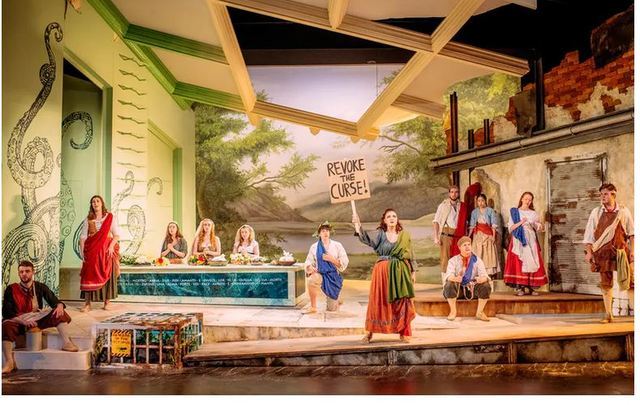 
There’s a book about musicals that every opera lover should read. Not Since Carrie by Ken Mandelbaum is a history of musical theatre’s greatest flops: a comprehensive study of the thousand ways in which a collaborative artform can crash and burn. It’s unbelievable stuff. The Broadway cast of 1961’s Kwamina participated in a voodoo ritual to neutralise the show’s critics (English National Opera is rumoured to be planning something similar). Adverts for Jule Styne’s Subways Are for Sleeping were banned from New York public transport after vagrants took them as an invitation to spend the night on board. And the prize exhibit: the RSC’s Carrie, whose star Barbara Cook was nearly decapitated on opening night, but whose director, Terry Hands, could not be fired because… well, one simply does not fire the artistic director of the Royal Shakespeare Company.

The point — and I promise, this genuinely does have something to do with Joseph Haydn — is that many of these fiascos had wonderful music. And in no case was the music alone sufficient to save the day. The principle is the same whether it’s Parsifal or Wicked: to work, every element of a musical drama has to pull together. A near-miss is still a miss, and in the operatic repertoire no near-misses are more frustrating than the 11 operas that Haydn wrote between 1766 and 1783 for the private theatre of his employer, Prince Esterhazy.

Here we have a composer of undisputed genius — more than that, the artist whose flair for vivid, characterful musical dialogue made Mozart’s Da Ponte’s operas possible. But Mozart took drama lessons from Haydn’s string quartets, not his operas. And whatever the reason — second-hand librettos, effect-laden set-pieces, or just the lack of commercial pressure at a court where, after a few glasses of Tokaj, aristocratic guests would applaud pretty much anything — the fact remains that Haydn’s music is never quite enough to get his operas off the ground.

The students of the Guildhall proved the point with a near-perfect staging of Haydn’s La fedelta premiata. The plot stinks. The goddess Diana demands that two faithful lovers be sacrificed to a sea monster (the director Stephen Barlow played it for laughs, with giant tentacles appearing from the wings). Enter three pairs of potential victims, who bimble along until every possible romantic misunderstanding has been exhausted and Diana materialises, dea ex machina, to deliver the moral. In short, the libretto is a clichéd, baggy mess.

Yet the individual musical numbers are terrific: rollicking hunting choruses, sweeping coloratura showpieces, and luminous romanzas which (listen, if you can, to Celia’s aria ‘Placidi ruscelletti’) could drop straight into Cosi fan tutte. At the Guildhall, with Adrian Linford’s designs (a sun-kissed steampunk Arcadia), and exuberant playing from the orchestra under Alice Farnham, it provided a glorious series of vocal showcases for its young cast. The costumes ranged across the centuries — Brideshead fop, Georgian grande dame, gangly stoner — providing a visual shorthand with which to navigate the unwieldy plot, and under Barlow’s direction the cast did everything possible to make these cartoonish figures live.

Recitatives buzzed and sparkled, and while there was no single voice that was fully finished from all sides (Elsa Roux Chamoux’s eloquent Celia, and Adam Maxey’s velvet-and-steel baritone as the priest Melibeo probably came closest), phrasing and articulation was fresh and natural across the company. It wasn’t the performers’ fault that we reached the end without much sense that these people mattered, or that the score was carrying us anywhere terribly important. Perhaps Haydn, the kindest of men, lacked the sliver of ice necessary to do anything really cruel to his silly characters. When they’re performed as likeably as they were here, you can’t entirely blame him.

Bratby surely didn't write the headline for his review, because he nowhere calls any of Haydn's operas "lousy," and indeed has high praise for parts of "La Fedelta Premiata." Unlike Mozart, Haydn wrote no operas for the commercial theatre and its popular audience - his job was to please Prince Esterhazy and the prince's court and guests - so it's not really surprising that those operas haven't pleased today's commercial audience enough to join Mozart's in the repertoire.

Haydn himself was under no illusions. Approached by an impresario to compose a new comic opera, he recommended Mozart instead. "If only I could impress Mozart's inimitable works on the soul of every friend of music, and the souls of high personages in particular, as deeply, with the same musical understanding and with the same deep feeling, as I understand and feel them, the nations would vie with each other to possess such a jewel." And: "I have often been flattered by my friends with having some genius, but he was much my superior." Where opera is concerned, posterity agrees. But coming in second to Mozart in opera is no mean achievement.

"Mozart took drama lessons from Haydn’s string quartets, not his operas." Nonsense. Mozart took drama lessons in the commercial opera house, for which he composed ten comedies and tragedies before achieving his first lasting success with "The Abduction from the Seraglio." And he attended dozens of other composers' operas and read many librettos looking for his kind of material. Nor were all of Mozart's mature articles successes, not today at least; "Idomeneo" is rarely performed and probably mainly because it's by Mozart, while his last opera, "La Clemenza di Tito," is nobody's idea of a success.
John Francis
Top

Idomeneo and Clemenza are rather like Haydn's operas: they contain some beautiful set pieces, but opera seria was already on the way out. I quite like Idomeneo, but in the opera house I'd far rather see Figaro, Giovanni, Cosi, Magic Flute or Abduction, none of which has ever gone stale for me.
And sorry John, Haydn is not second to Mozart. More like 22nd. He's also behind Verdi, Wagner, Puccini, Strauss, Bizet, Britten, Bellini, Donizetti, Rossini, Gounod, Leoncavallo, Mascagni, Janacek, Tchaikovsky, Handel, Monteverdi, Gluck etc - at least when it comes to public performances.
When was the last time you sat down and listened to a complete Haydn opera? In my case it's many years. Perhaps that's my own stupidity, but there are only so many hours...
Top

Haydn was second to Mozart in his time. (Surely you can't believe I was placing him ahead of Wagner!) I've listened to quite a few operas by 18th century Italian composers such as Cimarosa and Paisiello, and Haydn certainly places ahead of them, don't you think?
John Francis
Top

OK, you can have that.

Mind you Gluck was more popular but you have outlined why - that Haydn's operas were for private audience.
Top

Barney we've enjoyed Idomeneo too and I suppose I'd go to see La fedelta premiata if it came here--I know this-we saw “Il Mondo della Luna” at the NYC Hayden Planetarium quite a few years ago-an absolute delight the way they did it! Regards, Len

Sic transit gloria mundi: Paisiello's "Barber of Seville" was so popular that Rossinin was sharply criticized for daring to compose his own. And while Cimarosa's "Matrimnio Segreto" is seldom perormed today except occasionally in Italy, its popularity when new was such that the first revival of Mozart's "Figaro" lasted only a few perfomances before "Matrimonio" replaced it.
John Francis
Top

We might equally ask the same question about Schubert; why did his operas bomb?

I've never liked the music of Puccini - let alone the operas - except for "Petite Messe Solennelle". That Rossini was more popular that Beethoven in Vienna....well.. (cue exasperation!).
Top
Post Reply
8 posts • Page 1 of 1

Users browsing this forum: No registered users and 37 guests