Black Hopefuls Pick This Year in G.O.P. Races
By JENNIFER STEINHAUER
Published: May 4, 2010

Among the many reverberations of President Obama’s election, here is one he probably never anticipated: at least 32 African-Americans are running for Congress this year as Republicans, the biggest surge since Reconstruction, according to party officials. 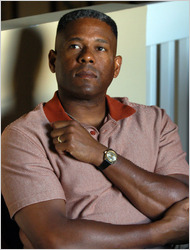 Allen West, running in Florida, says the notion of racism in the Tea Party movement has been made up by the news media.

See http://www.nytimes.com/2010/05/05/us/po ... ?th&emc=th
"Most men, including those at ease with problems of the greatest complexity, can seldom accept even the simplest and most obvious truth if it would oblige them to admit the falsity of conclusions which they have delighted in explaining to colleagues, which they have proudly taught to others, and which they have woven, thread by thread, into the fabric of their lives." ~Leo Tolstoy

Interesting. Thanks for posting.

If some of these candidates wind up winning, who would like to wager that they won't be welcomed into the Congressional Black Caucus?

"Although prepared for martyrdom, I preferred that it be postponed." - Winston Churchill

"Before I refuse to take your questions, I have an opening statement." - Ronald Reagan

35 African Americans were running in Goper primaries. Here are some partial results:

Marvin Scott won his May 4th primary in the Indiana 7th district, which covers most of Indianapolis. In November, he will face incumbent Democrat Andre Carson, son of late congresswoman Julia Carson, and one of only two Muslims in the US Congress.

In North Carolina's 13th District, Aftican American Goper Bill Randall, was, by a razor thin margin, the largest vote getter in the Goper primary. He faces white Goper Bernie Reeves in a June 22nd runoff. One of them will run against incumbent Democrat Brad Miller in November.

Oh, yes, I almost forgot. One Isaac Hayes is the Goper candidate for Illinois's 2nd District seat. He will be running against incumbent Democrat Jesse Jackson, Jr. Don't hold your breath on this one.
Don't drink and drive. You might spill it.--J. Eugene Baker, aka my late father
"We're not generating enough angry white guys to stay in business for the long term."--Sen. Lindsey Graham, R-S. Carolina.
"Racism is America's Original Sin."--Francis Cardinal George, former Roman Catholic Archbishop of Chicago.
Top

RebLem wrote: Oh, yes, I almost forgot. One Isaac Hayes is the Goper candidate for Illinois's 2nd District seat. He will be running against incumbent Democrat Jesse Jackson, Jr. Don't hold your breath on this one.

Do you mean to say that Isaac Hayes is going to get the shaft?
Top
Post Reply
4 posts • Page 1 of 1

Users browsing this forum: No registered users and 9 guests