Here's the place to talk about DVDs (or VHS) films and movies you have seen on television and recommend or don't recommend. Discuss actors and scores, too.

Not being much of a Bond fan I only got around to watching this last night.... 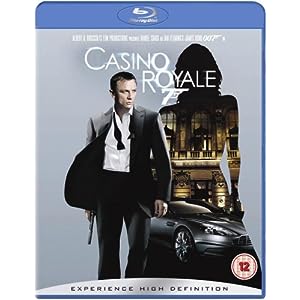 ....traditional Bond it is not but certainly worth a watch

The opening action sequence is great. There's a new age "sport" like that called "parkour" and the fellow "Bond" chases is played by Sébastien Foucan, a real-life parkour hotshot.
"Most men, including those at ease with problems of the greatest complexity, can seldom accept even the simplest and most obvious truth if it would oblige them to admit the falsity of conclusions which they have delighted in explaining to colleagues, which they have proudly taught to others, and which they have woven, thread by thread, into the fabric of their lives." ~Leo Tolstoy

DavidRoss wrote:The opening action sequence is great. There's a new age "sport" like that called "parkour" and the fellow "Bond" chases is played by Sébastien Foucan, a real-life parkour hotshot.

Agree with DavidRoss about the opening scene. I found it to be the highlight of the film. Craig is no Connery, but the film was enjoyable nonetheless. I found the following film with Craig, Quantum of Solace, to be not as good as this one.
Top

I can't ever remember not just enjoying, but truly "appreciating" a Bond (James Bond) film as much.

Did you notice after that incredible foot chase, he wasn't even breathing hard?!

"Everywhere is within walking distance if you have the time."
- Steve Wright
Top

A light bit of fun - but just once I'd like to see a high-stakes poker game where the guy wins with pairs of sevens and nines, not a straight-flush or four aces that always appears in movies and never at a table with real money on it.

Once in my life I did get four of a kind - and everyone else folded. Best hand I ever had was jacks and kings, not even a full house. The art of poker is not relying on outrageous luck, but turning King-Seven off-suit into a winning hand.
Top

No more JB films in the near future...

Fergus wrote:Not being much of a Bond fan I only got around to watching this last night....

....traditional Bond it is not but certainly worth a watch

Worst JB movie ever made, he is just not for this role.
Top
Post Reply
8 posts • Page 1 of 1

Return to “Films & Movies & Their Music”

Users browsing this forum: No registered users and 2 guests