Here's the place to talk about DVDs (or VHS) films and movies you have seen on television and recommend or don't recommend. Discuss actors and scores, too. 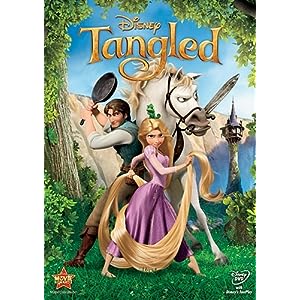 I'm not a fan of most animated films, but I've read great reviews and heard from people who have seen it, that it is an over-the-top movie for all ages, enjoyed by both genders. Still showing in the theaters, but will probably be gone by the time I get to see it. Fantastic 3-D effects, with a great cast of voices -- Mandy Moore, Jeffrey Tambor, Ron Perlman, Richard Kiel (best known as Jaws in "The Spy Who Loved Me"), among others.


From IMDB:
After receiving the healing powers from a magical flower, the baby Princess Rapunzel is kidnapped from the palace in the middle of the night by Mother Gothel. Mother Gothel knows that the flower's magical powers are now growing within the golden hair of Rapunzel, and to stay young, she must lock Rapunzel in her hidden tower. Rapunzel is now a teenager and her hair has grown to a length of 70-feet. The beautiful Rapunzel has been in the tower her entire life, and she is curious of the outside world. One day, the bandit Flynn Ryder scales the tower and is taken captive by Rapunzel. Rapunzel strikes a deal with the charming thief to act as her guide to travel to the place where the floating lights come from that she has seen every year on her birthday. Rapunzel is about to have the most exciting and magnificent journey of her life.

The soundtrack includes some delightful songs, some of which can be heard on YouTube clips. I liked the lyrics to this one (forgive its length):

Seven A.M., the usual morning line-up
Start on the chores, and sweep 'til the floor's all clean
Polish and wax, do laundry and mop and shine up
Sweep again
And by then
It's, like, seven-fifteen
And so I'll read a book
Or maybe two or three
I'll add a few new paintings
To my gallery
I'll play guitar and knit and cook
And basic'ly
Just wonder, when will my life begin?

Return to “Films & Movies & Their Music”

Users browsing this forum: No registered users and 11 guests