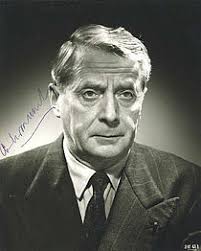 On five Saturdays in September 2012 (dates shown above), at 7:00 p.m. Eastern time, I commence offering a marathon five-week birthday tribute to conductor CHARLES MUNCH, born on 26 September 1891 in Alsace-Lorraine, once a part of Germany, which became France in 1919. Therefore, Munch (sometimes Münch) is considered French. He was the fifth of six children born to a father who was an organist and choir director. Early on, Munch was thinking of becoming a railroad engineer; fortunately, his studies with the violin place him on his celebrated path to conducting. In 1920, he began teaching violin at his alma mater, the Strasbourg school becoming concertmaster of several orchestras including the Leipzig Gewandhaus under both, Wilhelm Furtwängler and Bruno Walter. He debuted as a conductor in 1932 at age 41 and in that same year married the granddaughter of the founder of the famous Nestlé Chocolate Company, which made it possible to lead orchestras early in his career. Munch also studied with Czech conductor Fritz Zweig. He refused to conduct in Germany under the Hitler regime and received special recognition for taking this tep in 1945 and again in 1952.

While the number of orchestras conducted by Munch is voluminous, it is his work with the Boston Symphony Orchestra with whom he debuted in 1946 and eventually took the permanent conducting post in 1949 staying in Boston until 1962. For many, those were the "golden years" of the Boston Symphony, with Munch taking over from Serge Koussevitzky, and Pierre Monteux before that. His contract with RCA Victor brought the man legendary status—which still stands for many—given outstanding mono and recordings from 1954 to 1962 and beyond having the RCA "Living Stereo" preserving some of the finest French- and Russian repertoire recorded with spectacular and lifelike sound.

Given all that was top-notch with the conductor, he had and continues to have his detractors. It has been said Munch's more relaxed attitude among his musicians didn't bring forth the quality many expected from the BSO, however, many great musicial institutations bestowed honour after honour upon Charles Munch including Boston College and Univeristy, Brandeis, Harvard, and the New England Conservatory of Music.

Munch left a huge legacy of recordings on myriad labels, though it is the RCA Victor discs that captured the best of Munch's orchestral career with the Boston orchestra. He also recorded for EMI, Deutsche Grammophon, Columbia/Sony, and a number of other labels, including historical live performances on labels such as Music & Arts.

Munch passed away while on tour with the Orchestra de Paris in Richmond, Virginia on 6 November 1968 at the age of 77 just hours prior to conducting the performance.

Listen each week to programs displaying Charles Munch's art from the early 78-rpm era through the stereophonic era featuring some of the world's greatest collaborators. Click on this link to take you directly the the broadcast:

THE FOLLOWING RESPONES ARE
ABOUT PIANIST HAMISH MILNE


Another example of someone (yours truly) trying to pay attention to going-on in a field I thought I knew fairly well, and here you present an artist in his Seventies who seems to have played all over the place, and I've never heard of him!

Does this remind you of another instance?

We'll certainly try to listen in and get an impression.
Werner Isler
Top

I've heard the name but don't know his playing, so will also try to listen. Maybe my mother should listen, as she will remember the day he was born; ie the day she arrived in America. (And had to audition on the violin to get in, kind of.)
Donald Isler
Top

Dear Donald and Werner ... as always, I am delighted to hear from you. Two ISLERS at once is even nicer than one! All we need is one more (Mrs. Isler?) to complete the setup! Anyway, I appreciate your comments very much. Milne definitely seems to belong to the English but his fame is far-reaching among record collectors and piano aficionados. I have enjoyed his art for a long time and have always wondered why he is not far better known in the USA. His recordings have altered that a bit and he seems to be known more here. Regardless, Hamish Milne is a brilliant pianist who plays with a naturalness that captures one immediately. His devotion and love for the piano is most obvious to me. I hope you will enjoy the broadcasts. I wish I could have had another hour or two to showcase his art. If I make it to England again in the near future, I would love to talk with him directly.

Well, apparently the program got lost in the shuffle on Hamish Milne. Hopefully it will be broadcast next week. So stay tuned. The United States Postal Service is getting worse and worse - like most everything else that's going on in our world. You cannot depend on too much these days. If you attempted to tune in, my apologies. The Paavo Berglund (conductor) program was re-broadcast in place of the Milne.
Lance G. Hill
Editor-in-Chief
______________________________________________________

Users browsing this forum: No registered users and 72 guests