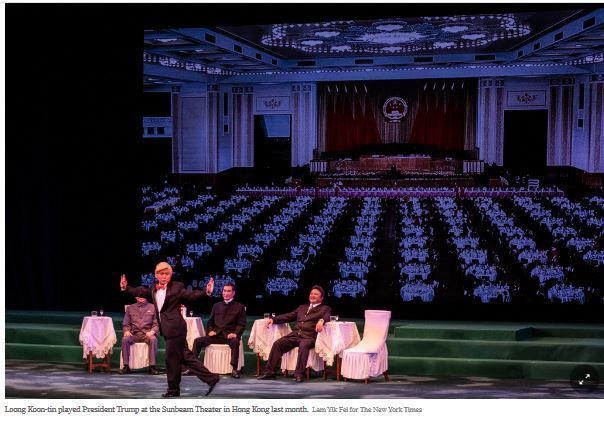 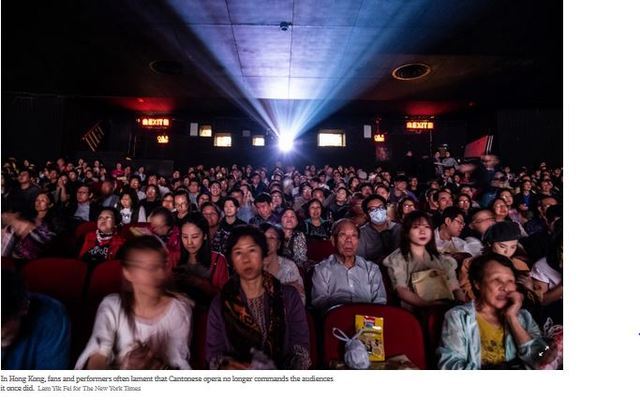 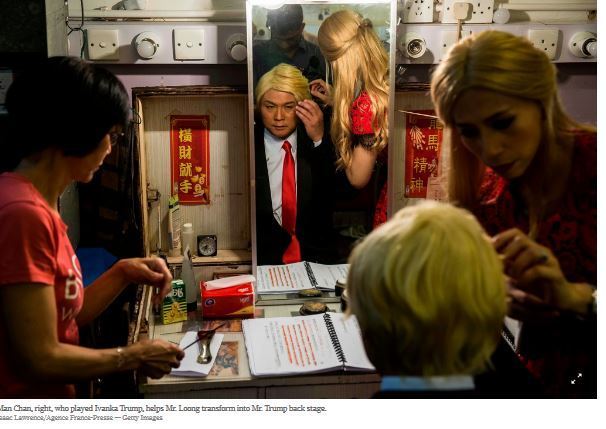 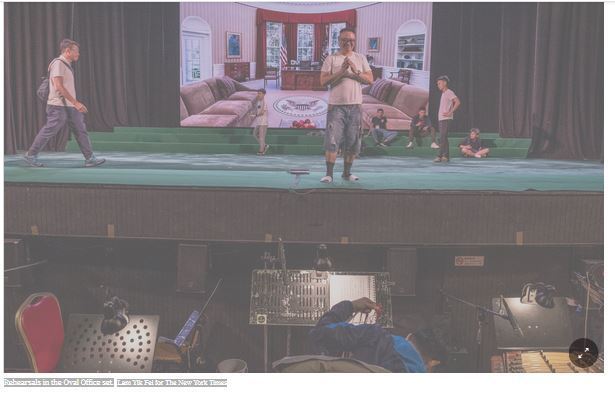 HONG KONG — Three stories of billboards alongside the Sunbeam Theater in Hong Kong were filled with images of performers in heavily painted faces and ornate headdresses.

But one, with an overly long red tie and a cloud of shiny yellow hair, was not like the others. You may have seen him before — on Twitter, on television, in the pro wrestling ring or the Oval Office.

It was President Trump, or at least an actor playing him, and he had come to one medium that has thus far resisted his presence: Cantonese opera.

The operators of the Sunbeam Theater, Hong Kong’s last commercial Cantonese opera theater, produced a three-and-a-half-hour show about Mr. Trump and China, which had a brief, four-day run last month.

The opera tells a story of Mr. Trump’s long-lost twin, Chuan Pu, who was raised in China and works at a crematory. There he meets the undead corpse of Liu Shaoqi, the Chinese leader who died during the Cultural Revolution.

The opera includes a Ping-Pong game between Mao and Nixon, who later gets stumbling drunk at a state banquet; a visit to the White House by a scheming Kim Jong-un; the ghost of Lincoln; Mr. Trump’s disappearance on an extraterrestrial spacecraft; and multiple singings of “Edelweiss.”

Mr. Li, 64, is a feng shui master who once worked as a screenwriter and began writing operas a decade ago. Seven years ago he took over the lease of the Sunbeam Theater, when it was in danger of being turned into a mall after a previous tenant could not afford a rent increase.

The theater was originally opened in 1972 by immigrants from mainland China.

Cantonese opera is one of the most popular versions of traditional Chinese opera, which combines acting, acrobatics, dance and singing in works set in the distant past performed with the accompaniment of a live orchestra.


In Hong Kong, fans and performers often lament that Cantonese opera no longer commands the audiences that it once did. But there is still significant public support.

A $345 million Chinese opera center opened in the West Kowloon Cultural District this year, with a 1,073-seat main theater and a smaller teahouse theater that serves dim sum during shows by up-and-coming performers.

Such government backing comes with a burden to steer clear of controversy, though.

“These venues are in fact very conservative,” said Chan Sau-yan, a music scholar and professor of cultural management in the Chinese University of Hong Kong.

“They wouldn’t allow anything like the Trump opera so the managers won’t get into trouble,” he said. “This could only happen in the Sunbeam Theater.”

The theater is a world away from the gleaming and airy new Chinese opera center. Refreshments are sold from vending machines and lines for the bathrooms snake down one of the aisles of the main theater, which also has a smaller space for screening movies.

Most of the shows presented take on the traditional realm of historic battles, lost loves and palace drama. But Mr. Li began to change things up, writing an opera about Mao Zedong that was first performed in 2016.
Sign up for The Interpreter


That work, which focused on Mao’s relationships with women, was criticized in Hong Kong for whitewashing the brutality of his rule. Similar complaints of glossing over Communist rule have dogged his Trump opera. Mr. Li said he left out some negative aspects out of his works because of a concern he would frighten the audience.


“I want them to be inside the story but not scared or afraid,” he said. “So I neglect some of the sensitive and controversial issues.”

The Trump opera is the second part of a series that began with the Mao work. Mr. Li said he saw obvious connections between the two men. Mr. Trump, he noted, is 72, the same age as Mao was at the start of the Cultural Revolution.

“This is the part where most old men will do some crazy things, at the age of 72,” he said. “Chairman Mao and Donald Trump, they are similar. They are arousing a revolution by neglecting the government and neglecting everybody and doing what they think.”

Cantonese operas focused on current events are rare, but there is some precedent. In the 1930s and ’40s, stories about modern political figures like Ghandi and Hitler emerged in an effort to appeal to new audiences.

“They had to innovate to stay alive,” Professor Chan said. “That was how Cantonese opera came to the revolution of using modern subject matters and especially political issues.”


Mr. Li said he sought a similar boost for the theater from his new work. “We get a lot of audience who have never seen Cantonese opera, but because of Trump they come,” he said.

Opening night began with offerings to Huaguang, the patron deity of Cantonese opera, at a shrine alongside the stage, and, at the theater’s entrance, a ceremonial presentation of a roast pig, incense and imitation gold ingots.

The audience included a mix of older, Cantonese opera die-hards and younger people who were out for a laugh.

Henry Chan, a 27-year-old financial analyst, said he had not seen a work of Cantonese opera since he went with his grandmother as a child. But he was intrigued by Mr. Trump.

One reviewer for Stand News, a local online publication, called it the sort of “preposterous dream that could only appear in Hong Kong.”

Mr. Li got the Trump bump he hoped for, and the short opening run was sold out. Another run is planned for next year. Mr. Li hopes to one day bring the performance to the United States and dreams of a performance in the White House.

“One day I want to show the opera to the real Donald Trump and make him laugh,” he said.
The Sunbeam Theater is Hong Kong’s last commercial Cantonese opera theater.CreditLam Yik Fei for The New York Times

Users browsing this forum: No registered users and 86 guests