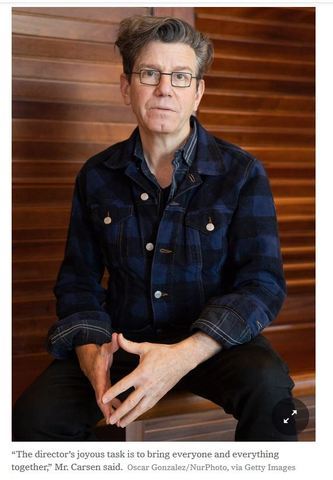 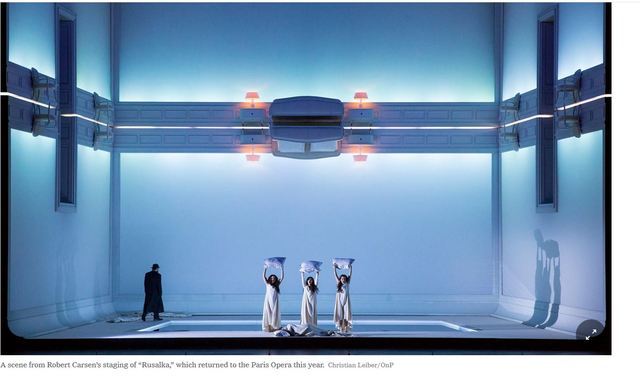 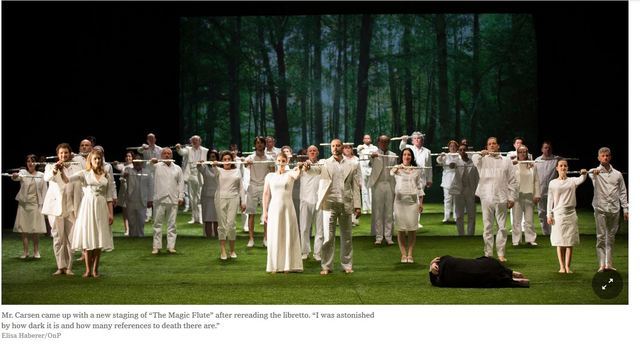 PARIS — In an art form as hyperbolic as opera, Robert Carsen stands out for the deceptive simplicity of his work as a director. Rather than aiming to shock or show off his cleverness, his productions — about 120 over three decades — have routinely won him accolades for their visual beauty and the intelligence of their storytelling.

Few stages are more welcoming to the 64-year-old Canadian than those of the Paris Opera. Earlier this year, his immensely popular 2001 staging of “Rusalka” returned here, and his 2013 production of “The Magic Flute” is back through June 15. I tracked him down in Berlin, where he had just directed a world premiere of Detlev Glanert’s opera “Oceane” at the Deutsche Oper. The following conversation has been edited and condensed.

You trained as an actor yet became a director. How come?

I’d wanted to be an actor since the age of 8. I had a very bad speech defect as a child, and I was taught to speak again by a voice teacher by reading Shakespeare and other dramatists. That got me interested in the theater. Much later, while I was studying at the Bristol Old Vic Theater School in England, one of the teachers asked me if it had ever occurred to me to be a director.

Well, yes. At first I thought, am I that bad an actor? And he said, no, you’re not, but you come to all the rehearsals — not just the scenes you’re in — and we don’t see so many students who are interested in everything. So I thought maybe he’s right: I should try it out. And I started working as an assistant director. But it was almost 10 years before I got my first professional job.

Why opera, not theater?

That was mainly an accident. I needed to find work quickly, and someone put me in contact with Gian Carlo Menotti at the Spoleto Festival and the festival took me on board. My first jobs were all unpaid, and they turned out to be in opera. For someone just starting, there were so many talented young people with really good academic backgrounds wanting to be theater directors that somehow opera seemed the right thing to try out, not only because I loved music theater but also because I could speak French, German, and I was learning Italian very quickly.

How did you make your mark as an opera director?

My first big professional job was “Mefistofele” at the Geneva Opera in 1988. Hugues Gall, the intendant, had liked something I’d done semiprofessionally, and we started discussing possible titles. The extraordinary coincidence is that I suggested “Mefistofele,” which he had just agreed to do with Samuel Ramey. That was my breakthrough. It traveled widely and in fact was just put on again at the Met in New York last autumn, 30 years almost to the day after the Geneva opening!

Was that when opera houses began looking for you?

It wasn’t that suddenly everyone was banging on my door but, yes, I was able to start getting some other jobs.

How do you pick your operas?

What often happens is that a management already knows what they’d like to put on, and they ask if you’d like to direct it. Then it’s a question: Is this something I could do well? I can only take on a work if I have a genuinely positive response to it. There are certain composers, like Rossini, whose work doesn’t speak to me, so I’d never attempt to direct their works as it would do them a disservice. Then there are theaters one has worked with before, and they may say, O.K., what shall we do next?

How do you prepare?

I ask myself, how do I feel about this opera and how can I bring this to life for the audience? We directors are always saying that we are storytellers. But because the number of operas is comparatively limited, it’s as if we’re telling stories to children who already know the stories. So we often feel we have to tell a particular story in a new way, so that the audience can experience it as if for the first time. An opera production should not be Proust’s madeleine.

In the case of “The Magic Flute” at the Paris Opera, why did you decide on an entirely new production?

I first directed it in Aix-en-Provence in 1994, but when I reread the libretto I felt completely differently about it. I was astonished by how dark it is and how many references to death there are. I remember counting over 60 of them, which for a joyous opera is something of a surprise. And I thought perhaps the opera itself is a symbol of our journey through life to death. I think that’s one of the reasons why death is so present in poetry, opera and theater: It helps us imagine our life ending.


The best things to do in N.Y.C. during the hottest season of the year. This limited-edition newsletter will launch before Memorial Day and run through Labor Day.
Mr. Carsen came up with a new staging of “The Magic Flute” after rereading the libretto. “I was astonished by how dark it is and how many references to death there are.”


Is opera a battle for power among the composer, the librettist, the singers and the director?

I’m not interested in any kind of power battle. The reason opera is such a powerful art form is that it is the combination of all the arts: the spoken word, song, music, the visual arts, sculpture, painting, poetry, dance, architecture and now film, too. Everything is there. And the director’s joyous task is to bring everyone and everything together. Richard Strauss wrote his brilliant last opera, “Capriccio,” on this very theme.

Do you have any say in picking the singers for a new production?

It depends on the opera house. Some come to you with the singers in place. Very often, one is thrilled. And other times, you know perhaps it wouldn’t work so well. Once or twice, with a certain singer, I’ve thought to myself, maybe better not.

How do you manage divas and divos?

The word divo or diva is usually associated with bad behavior. This often comes from insecurity. So I feel my job is to make people feel as secure as possible, to make them feel trusted and that they can trust me. This can also be difficult because sometimes, five minutes into the first day of rehearsal, you’ll find yourself putting two people in bed together who’ve only just met, and you need them to make passionate love together! I think it’s important to create an atmosphere where people feel they can try things out and where they won’t be exposed or judged.

Is opera above all an emotional experience?

For me, it is. When it works really well, there is an alchemical balance between the head and the heart. On the one hand, you have the libretto, which is completely concrete and intellectual. And then you have the music, which is totally abstract and emotional. An opera is only really satisfying if the head and the heart are satisfied and one cannot really explain why.

Do you have a favorite opera house?

I always say there’s only one theater in the world, and that’s the one you’re working in. Theater is such an immediate activity. There’s the deadline, the opening night, you’re working towards that. It’s like life: There’s never enough time. But no matter how large or small the stage, the budget, the auditorium or the city, it’s always the same process: You’re collaborating with a group of people to bring something to life that doesn’t really exist.

“The Rake’s Progress.” That’s at the top. I also love Handel operas. I’ve only done about six or seven — there are quite a lot more to do. I love very modern work, and I love very early works particularly. There’s a freedom in both cases. There’s also theater. I love doing musicals, and I’d love to do some more. I also design exhibitions, which has led me to designing some plays and operas. It seems to me that there’s still a lot to do.